Toenail Fungus | How A Chiropodist Can Help

There are a variety of reasons toenails get like this. It could be from trauma, psoriasis and a variety of other nail disorders. But the most common cause of thick ugly toenails is a fungal nail infection.

If you would like to get them looking better but not sure where to start, we can help. 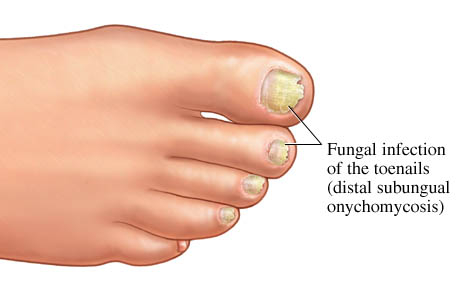 What causes fungal infections of the toenails?

Fungal infection of toenails is a common foot health problem. A majority of victims don’t seek treatment; maybe don’t even recognize the existence of a problem. Studies estimate that it afflicts three to five percent of the population. However, chiropodists think that because so many cases go unreported, the incidence is much higher than that.

Probably one reason that so many people ignore the infection is that it can be present for years without ever causing pain.

Its prevalence rises sharply among older adults (20 to 30 percent, the studies say, though chiropodists think it’s much higher). Because the older adults may be experiencing much more serious medical problems, it is understandable that fungal nails can be passed over as very minor, though it is anything but that.

Whatever the case, the disease, characterized by a change in a toenail’s color, is often considered nothing more than a mere blemish — ugly and embarrassing. It is assumed that since white markings or a darkening of the nail are minor occurrences, the change represents something minor as well, even when the blemish spreads.

It may be that cosmetologists see this condition as often as doctors. Nail polish is an easy solution for many women, rendering the problem “out of sight, out of mind”.

In many cases, however, that change in color is the start of an aggravating disease that ultimately could take months to control. Fungal infection of the nails is known to chiropodists as onychomycosis.

Onychomycosis is an infection of the nail bed and plate underlying the surface of the nail and is caused by various types of fungi, which are commonly found throughout the environment.

Fungi are simple parasitic plant type organisms, such as mould and mildew, which lack chlorophyll and therefore do not require sunlight for growth.

A group of fungi called dermatophytes easily attack the nail, thriving off keratin, the nail’s protein substance. When the tiny organisms take hold, the nail may become thicker, yellowish‑brown or darker in colour, and foul smelling.

Debris may collect beneath the nail plate, white marks frequently appear on the nail plate, and the infection is capable of spreading to other toenails, the skin, or even the fingernails. This not only makes it embarrassing to wear sandals, but it can even make it painful to walk and may significantly affect mobility.

This happens because fungal nail infections are frequently accompanied by thickening of the nails, which then cannot easily be trimmed and may cause pain while wearing shoes. This disease can frequently be accompanied by a secondary bacterial or yeast infection in or about the nail plate.

Because it is difficult to avoid contact with microscopic organisms like fungi, the toenails are especially vulnerable around damp areas where people are likely to be walking barefoot — swimming pools, locker rooms, and showers, for example.

Injury to the nail bed may make it more susceptible to all types of infection, including fungal infection.

Those who suffer chronic diseases, such as diabetes, circulatory problems, or immune-deficiency conditions, are especially prone to fungal nails. Other contributory factors may be a history of athlete’s foot and excessive perspiration.

What do I do to prevent a fungal toenail infection?

Because fungi are everywhere, including the skin, they can be present months before they find opportunities to strike, and before signs of infection appear. By following precautions, including proper hygiene and regular inspection of the feet and toes, chances of the problem occurring can be sharply reduced, or even put to a halt.

How artificial nails and nail polish can contribute to the problem

Moisture collecting underneath the surface of the toenail would ordinarily evaporate, passing through the porous structure of the nail.

However the presence of an artificial nail or a polish impedes that, and the water trapped below can become stagnant and unhealthy which is ideal for fungi and similar organisms to thrive. There is one exception to this. By using specially formulated medical grade nail polish, the nails will be able to breathe, and medications will be able to penetrate the polish and remain effective.

Always use preventive measures when applying polishes. Disinfect home pedicure tools and don’t apply commercial or salon polish to nails suspected of infection. Beware of toes that are red, discolored, or swollen and seek help from your chiropodist.

What can I do to help treat my fungal toenail infection?

Depending on the nature of the infection and the severity of each case, treatment may vary. A daily routine of cleansing, over a period of many months, may temporarily suppress mild infections. White markings that appear on the surface of the nail can be filed off, followed by the application of an over‑the‑counter liquid antifungal agent.

However, even the best over-the‑counter treatments may not prevent a fungal infection from coming back. Disinfecting your environment, socks, shoes and bed linens is extremely important in preventing a recurrence.

A fungus may work its way through the entire nail, penetrating both the nail plate and the nail bed. If an infection is not overcome or continues to reappear, further medical attention is strongly advised.

A chiropodist can detect a fungal infection early, culture the nail, determine the cause, and form a suitable treatment plan, which may include prescribing topical or oral medication, and debridement (removal of diseased nail matter and debris) of an infected nail.Indeed, debridement is one of the most common foot care procedures performed by chiropodists.

Topical medications can be effective in minor infections, or helping in prevention of recurrence. Oral antifungals medications can also be an effective treatment. They offer a shorter treatment outlook (three to four months) and improved effectiveness, though chiropodists advise that lengthier treatments, up to 12 months, may still be required for some infections. However, current studies show that there may be some unwanted side effects with any oral antifungal.

Laser treatment for fungal nails is a newer technology which also has some success in improving the colour and condition of the nail.  Photodynamic therapy (PDT)  with a photosensitive agent has proven to show excellent results with an ongoing care regimen. In our office we have been treating fungal nails with a combination of topical antifungals and PDT with great success. Many of our clients nails have never looked better.

In some cases, surgical treatment may be required. Temporary removal of the infected nail can be performed to permit direct application of a topical antifungal. Permanent removal of a chronically painful nail, which has not responded to any other treatment, permits the fungal infection to be cured, and prevents the return of a deformed nail.

Trying to solve the infection without the qualified help of a chiropodist can lead to more problems. With new technological advances in combination with simple preventive measures, the treatment of this lightly regarded health problem can often be successful.

Photodynamic Therapy (PDT) is a form of phototherapy involving light and a photosensitizing chemical substance, used in conjunction with molecular oxygen to elicit cell death (phototoxicity). PDT has a proven ability to kill microbial cells, including bacteria, fungi and viruses.

When the photosensitive agent is irradiated with a certain wavelength of light, it changes the energy structure of the photosensitive chemical and becomes very destructive to adjacent cells. Learn more about Light Therapy Treatment for toenails at Custom Foot Clinic.

I am a Registered Chiropodist and Foot Specialist who has been helping patients for over 20 years.

Did you know there are 600 Registered Chiropodists in Ontario and only 60 Podiatrists? Chiropodists and Podiatrists are the only regulated health professionals that specialize in treating conditions of the foot.

Chiropodists today must complete 7 years of post-secondary education before they get their professional designation. We do complete case management of foot problems, assessing and treating the entire foot and its complications. 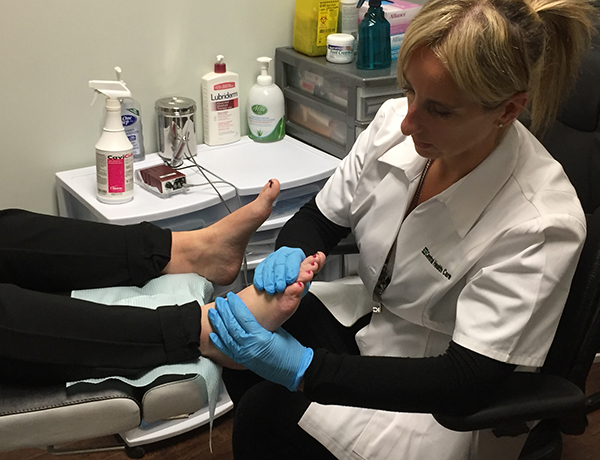 I am an experienced Foot Specialist and Registered Chiropodist with two locations in Guelph and Milton.

I provide a full assessment, biomechanical exams and gait analysis. I will be able to help address your foot discomfort with a variety of techniques including foot care treatment, custom orthotics, orthopaedic shoes, medication, laser or physical therapy.

I can help get your feet functioning better so you can feel better. Contact me today.